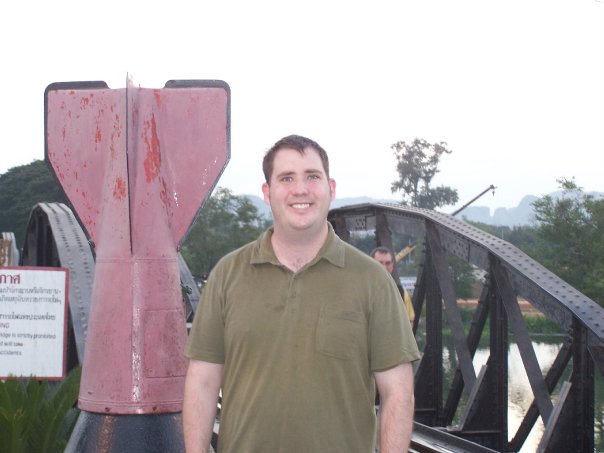 The smiling appears forced because it is–there is nothing to smile for here.

If you are ever fortunate enough to visit Thailand the “to do” list is long: Bangkok, Chumphon (for access to the Gulf of Thailand and Ko Samui with its epic “Full Moon” parties), Bangkok some more, Phuket (gateway to Phi Phi Island, famously portrayed in “The Beach”), lazy days and hard nights on Ko Tao, more partying in Bangkok and Phuket, Chiang Mai (for the obligatory hike), and then–a month or more gone by–back to Bangkok to either vaporize into the ether, or, if you absolutely must, fly home.

You should do all those things.

But if you are a history buff, a wannabe history buff, or want to create the plausible illusion of being a history buff–or if you are one of those splendid individuals that just thrives on being lost, obscure, and different–you must squeeze out an afternoon for Kanchanaburi. 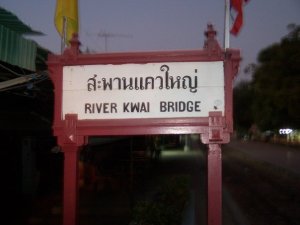 If you already know what Kanchanaburi is, or like the “Lisa You Smell Like Gasoline” song from the Simpsons, you will want to listen to this song as you read:

I came to Kanchanaburi during the 2008 Thai Revolution the same way I came to Tallahassee after the Global Economic Collapse–by bus.

(For my write up on the dual Thai revolutions, please visit my “Welcome to the Revolution.”)

A more themed approach would have been to take the train, which presumably would have taken me directly to, if not actually over, the famed “Bridge on the River Kwai.” But Northbound routes were off limits at the time, owing to an animated public disagreement between Thais wearing red shirts and Thais wearing yellow shirts.

Like many places outside the main tourist hubs, the bus just sort of dropped me off in the middle of a forlorn flyblown dirt track that some ambitiously refer to as a “street.” I was on my own to figure out where I was and how to get to a place anyone would actually like to be. This typically involves a multi-mile trek so if you want to go, pack light.

Since I knew the bridge was five kilometers north of town, I just picked up my bag and walked north.

The city of Kanchanaburi itself looks like any other anonymous city you pass on a bus traveling across the realms of a very poor country. The people’s eyes dint strong and stoic, the shops and houses succumb ramshackle and dilapidated. The half-emptied bodega shelves offer cheap Thai whiskey, soap, and toilet paper.

Just one of hundreds of Buddhist temples

As the last trace of cityscape crumbles into a vast greenery there are beautiful Technicolor Buddhist temples–in the hundreds–sweeping hodgepodge into the distance like the grandest clumsy graveyard in the world.

But as soon as I escaped reality I reentered it. In this newer Kanchanaburi there was a sidewalk and signs directing me to Saeng Chuto Road. Its the main drag, populated with pizza places, little bars, internet cafes, and if you really search for them, the occasional Thai-themed Thai restaurant.

The whimsy of traveling to the backwaters of Thailand–to visit a bridge portrayed in a fiction movie shot in Sri Lanka I never saw based upon a book I never read by an author who never visited and thus wrote about a then-nonexistent bridge–abruptly sobers before the Kanchanaburi War Cemetery.

The Japanese forced 60,000 British Commonwealth, American, and Dutch Prisoners of War, with 180,000 Asians impelled into labor by conscription or kidnapping, to build the 250 mile long Burma-Siam Railway under sickening conditions. A part of this railway was built along the River Kwai but never actually crossed it.  The prisoners did build two bridges over the Mae Khlung River, of which one survived.

What is a local chamber of commerce to do?

The Thais, arguably the most tourist accommodating people in the world, changed the name of the river so foreigners would have someplace to snap a picture. This does not make the bridge a fake mind you–thousands died building it.

Seven thousand of those prisoners of war are buried at the Kanchanaburi War Cemetery, 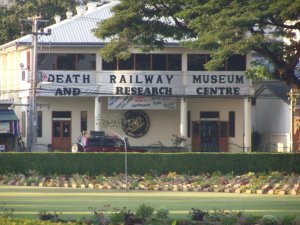 maintained to the highest military dignity by the Commonwealth War Graves Commission. Pacing from row to row there is no noise, not even a bird fluttering.

Further detailed evidence of man’s inhumanity to man is found at the adjacent death-railway museum.

For the unwary, the bridge is like any other. It is built with steel, and the only marker that it was infused with huge amounts of blood is the plaque placed there from its builders: Yokogawa Bridge Works, Tokyo, Japan.

Today the public is permitted to walk back and forth on the tracks and the very few trains that cross the bridge slow to a crawl when passing. Tourist kiosks, overpriced and opportunistic museums, ice cream vendors, and pizza parlors decorate where the thousands have fallen. 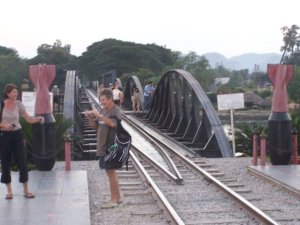 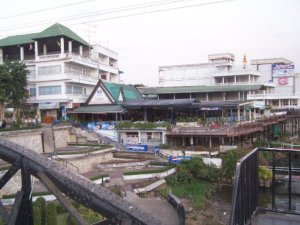 The bridge promenade, apparently brought to you by Pepsi.

If this is all too much for the visitor, shots of whiskey can be purchased at several area street carts for less than ten cents.

If you visit and choose to spend the night–and you should–you will be spoiled for luxury accommodation at budget prices. I stayed at a hotel where the rooms were individual cottages floating on the River Kwai (or the Mae Khlung), festooned to a boardwalk intruding into the river by at least fifty feet. Enjoying one of the great idyllic hotel views from the rocking chair on my floating porch, I whiled away an agreeable afternoon drinking the local brew while reading about the Burma-Siam Railway. This floating paradise set me back $15.

Meals can be had everywhere for next to nothing, but the guidebooks recommend the hut-like local hostel (very good Thai and Western food). In another thatched roof pavilion of a restaurant, with no lighting except for jokingly small candles, I enjoyed a spicy (as in, “I want this meal to end with an ambulance,” spicy) shrimp and prawn curry.

Finally, there is an English used-bookstore in Kanchanaburi which is owned by an American who came for the day and just never left. If you don’t want a book, you can sit at its outside counter and buy a large Bintang. Ask anyone, anywhere, in any language, and they will point the way. Stop by and say “hi” for me.

I owe him money.

I was just gone a day and a night–a quick break from angry red and yellow city crowds.

One night is enough or you might get trapped by the absurd affordability and the affable attitudes of the comparatively rural natives–the sort of people who will change the name of their river because they can’t change the name of your movie.

The trains seemed to be running again, but I made the five kilometer hike and took the bus back anyway.

Take the train, obviously. There is an early morning and early afternoon train from Bangkok

Thonburi (Noi) station and a weekend tourist service from Bangkok’s Central Station which will include a 45 minute stop at the Kanchanaburi main station allowing for the brief sobering walk to the Kanchanaburi War Cemetery.

If you do not want to take the train just take a taxi from Bangkok to Mor Chit (Northeast Bus Terminal) and one of the ticket kiosks will be able to help you as departures for the three hour, $7 trip, are frequent.

Hotels get very cheap here–like $5 cheap. Splurge $20 and stay on the river instead. Rationalize the extra $$$ after reviewing a list of the diseases local mosquitoes have on offer.

Bring cash. At the time I went, there were no ATMs and banking hours were aspirational. 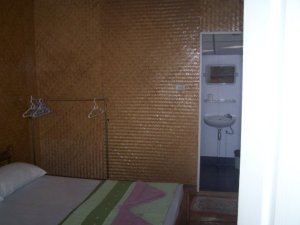 1 thought on “Your Next Adventure: Kanchanaburi, Thailand (Bridge on the River Kwai)”